How to build packages with Luet

Luet currently supports Docker and Img as backends to build packages. Both of them can be used and switched in runtime with the --backend option, so either one of them must be present in the host system.

Docker is the (less) experimental Luet engine supported. Be sure to have Docker installed and the daemon running. The user running luet commands needs the corresponding permissions to run the docker executable, and to connect to a docker daemon. The only feature needed by the daemon is the ability to build images, so it fully supports remote daemon as well (this can be specified with the DOCKER_HOST environment variable, that is respected by luet)

Luet supports Img. To use it, simply install it in your system, and while running luet build, you can switch the backend by providing it as a parameter: luet build --backend img. For small packages it is particularly powerful, as it doesn’t require any docker daemon running in the host.

Luet and img can be used together to orchestrate package builds also on kubernetes. There is available an experimental Kubernetes CRD for Luet which allows to build packages seamelessly in Kubernetes and push package artifacts to an S3 Compatible object storage (e.g. Minio). 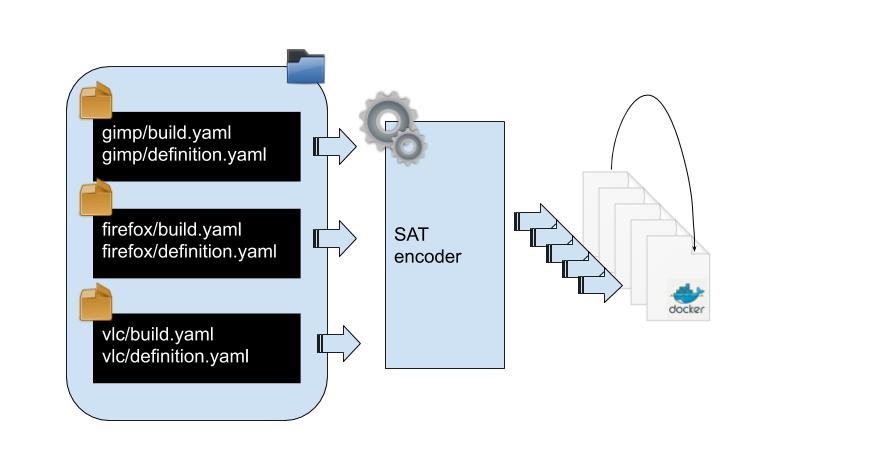 Luet provides an abstraction layer on top of the container image layer to make the package a first class construct. A package definition and all its dependencies are translated by Luet to Dockerfiles which can then be built anywhere that docker runs.

To resolve the dependency tree Luet uses a SAT solver and no database. It is responsible for calculating the dependencies of a package and to prevent conflicts. The Luet core is still young, but it has a comprehensive test suite that we use to validate any future changes.

Building a package with Luet requires only a definition. This definition can be self-contained and be only composed of one specfile, or a group of them, forming a Luet tree. For more complex use-cases, see collections.

Run luet build --help to get more help for each parameter.

Build accepts a list of packages to build, which syntax is in the category/name-version notation. See also specfile documentation page to see how to express packages from the CLI.

At the moment, luet can compress packages and tree with zstd and gzip. For example:

Will output package compressed in the zstd format.

See the --help of create-repo and build to learn all the available options.

In the following example, we are creating a dummy package (bar/foo). Which ships one file only, /foo

To build it, simply run luet build bar/foo or luet build --all to build all the packages in the current directory:

Luet “trees” are just a group of specfiles, in the above example, our tree was the current directory. You can also specify a directory with the --tree option. Luet doesn’t enforce any tree layout, so they can be nested at any level. The only rule of thumb is that a build.yaml file needs to have either a definition.yaml or a collection.yaml file next to it.

In the example above we have created a package from a delta. Luet by default creates packages by analyzing the differences between the generated containers, and extracts the differences as archive, the resulting files then are compressed and can be consumed later on by luet install.

Luet can create packages from different building strategies: by delta, by taking a whole container content, or by considering a single directory in the build container.

Besides that, a package can reference a strict dependency on others.

Let’s extend the above example with two packages which depends on it during the build phase.

As we can see, now Luet generated 3 packages, bar/foo, bar/ineedfoo and bar/ineedfooandbar. They aren’t doing anything special than just shipping text files, this is an illustrative example on how build requirements can be combined to form new packages:

See the package definition documentation page for more details on how to instruct the Luet compiler to build packages with different strategies.

Luet can push and pull the docker images that are being generated during the build process. A tree is represented by a single docker image, and each package can have one or more tags attached to it.

To push automatically docker images that are built, use the --push option, to pull, use the --pull option. An image repository can be specified with --image-repository flag, and can include also the remote registries where the images are pushed to.

Luet doesn’t handle login to registries, so that has to be handled separately with docker login or img login before the build process starts.

When packages are cached, for iterating locally it’s particularly useful to jump straight to the image that you want to build. You can use --only-target-package to jump directly to the image you are interested in. Luet will take care of checking if the images are present in the remote registry, and would build them if any of those are missing.

Was this page helpful?

Glad to hear it! Please tell us how we can improve.

Sorry to hear that. Please tell us how we can improve.